It's Gonna Be Wild This Year 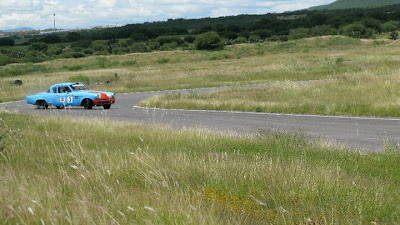 Check out Finnish rally driver Harri "Rovis" Rovanperä putting one of Mats Hammarlund Racing cars through the paces and getting some seat time before the race in a few more day. 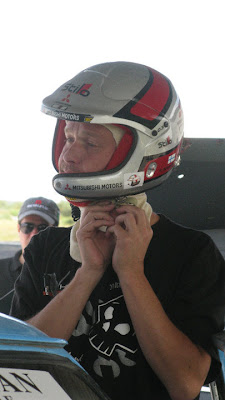 I have been picking up bits and pieces here and there and it's not encouraging but here goes...

Gerie Bledsoe said; Back in the home office in California pumping out info on the Pan Am race. Floods in southern Mexico caused by tropical storms are a concern.


Rene Ortega said; Yep, at least here in Oaxaca many roads are closed and some other in really bad shape.


Marcia Blas said: Heard on the radio today and read a bit on the internet. Feel for the folks dealing with the horrific mudslides! Thanks for keeping the updates coming!

Jorge Arellano Vital said; Lots and lots of rain in Chiapas and Oaxaca state, it hasnt stopped raining in the area in more than 36 hours. Relatives in Oaxaca told me that they have been told it will keep raining for at least 72 more hours.

VILLAHERMOSA, Mexico — Floods that have affected almost one million people in the south and east of Mexico will likely worsen after the opening of a dam and predictions of more rain, a state governor said Wednesday.

"Heavy rains are predicted, not only in Tabasco (state) but also in the whole south-southeastern region, including storms and hurricanes... which would put us in a more critical situation," Tabasco governor Andres Granier told local journalists.

The opening of the region's Penitas dam could release up to 2,000 cubic meters of water per second to the Carrizal and Samaria rivers, which were already at critical levels, Granier said.

"The worrying thing is that for people in Tabasco, the worst -- our real rainy season -- is starting now," he added.

The states of Veracruz, Oaxaca and Tabasco were the worst hit in the floods that swept through entire towns and affected more than 900,000 people in some way, according to state civil protection officials.

The total toll from the heaviest rains in living memory in Guatemala and Mexico rose above 50 on Tuesday, including seven in Mexico.

Guatemalan officials on Tuesday called off the search for 15 more corpses over safety fears.

In Mexico, President Felipe Calderon said rainfall was more than three and a half times the average during a visit to Tabasco Tuesday, blaming the situation on climate change. 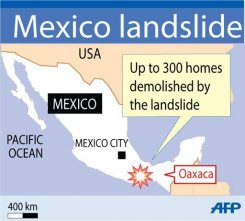 Teams competeing in this years La Carrera Panamericana will have to be concerned about possible road conditions for more than the usual reasons. This year's rainy season in Mexico has been the worst on record. A landslide buried 100 to 300 homes in Mexico's Oaxaca state early today as residents slept, and the governor said he fears hundreds may have died.

The ground gave way in Santa Maria de Tlahuitoltepec around 4 a.m. according to the Oaxacan newspaper Excelsior. Donato Vargas, a town official, said that at least 400 people are missing, according to the BBC.

"We were all sleeping and all I heard was a loud noise and when I left the house I saw that the hill had fallen," Vargas told the Associated Press.

Rescue teams are trying to make their way to the town, about 50 miles east of the capital city of Oaxaca, but bad weather has cut off several roads. Rescuers from at least four states have been sent to the town, with many being flown in with rescue dogs and machinery, the BBC reports. President Felipe Calderon will reportedly visit the town later today. "There has been lots of rain, rivers have overflowed and we're having a hard time reaching the area because there are landslides on the roads," Gov. Ulises Ruiz said, according to The Associated Press.

He told the Televisa network that he fears as many as 1,000 people may have been buried alive when heavy rains overnight caused a mountainside in the southwest Mexican town to collapse, the AP reported. The mayor of Santa Maria de Tlahuitoltepec, Palemon Vargas Hernandez, said 8,000 of the town's 10,000 residents had been affected. Survivors were gathering in the town's center and looking for shelter. Power and phone lines in the town are out. Houses that were not buried in the slide were on the brink of collapse, MSNBC reported.

Santa Maria de Tlahuitoltepec is home to the indigenous Mixe culture, one of Mexico's poorest, according to the BBC.

Flooding earlier this month killed 25 people. Hurricane Karl, which made landfall Sept. 17 on Mexico's Gulf Coast, was blamed for the deaths of at least 15 people. In July, Hurricane Alex caused 22 deaths and left 40,000 people homeless, according to Agence France-Presse.

The landslide is the latest weather-related disaster to befall a nation suffering from a relentless string of hurricanes, tropical storms and depressions that have slammed southern and eastern Mexico in the past several weeks, flooding cities, valleys, historic sites and broad stretches of farmland.

Would You Loan Your Car To A World Famous Rally Driver? Hell Yes!

I just got the coolest letter from my good friend Othon Garcia in Mexico. I laughed very hard when he said, "Unfortunately he returned the car without a single scratch." Thanks Othon! 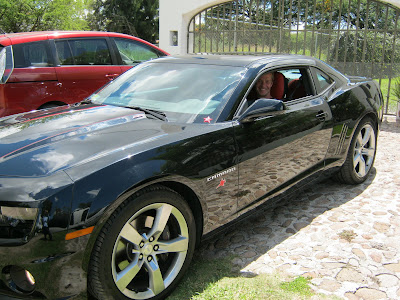 Last Friday something out of the ordinary happened to me: I received a call asking me if I could lend my Camaro to Harri Rovanperä!!! It turns out that he was in San Miguel de Allende and wanted to go take a look at the speed stages around Queretaro and he didn’t have a proper car to do so.

So of course I said yes! How many time a top World Rally celebrity asks you for a car?!

Unfortunately he returned the car without a single scratch… I was hoping for at least a small bump as a souvenir so if people ask me “what happened to your Camaro?” I could have answer: “well, I lent it to Harri Rovanperä and there you go! These Finish World Rally Championship winners can not be trusted now!”

By the way I turns out that Harri is a Mustang guy. He told me he owns a 800 HP Super Snake. Nonetheless he conceded the Camaro was a very nice car despite being 60K USD cheaper than his Mustang!

P.S. Harri came to my home with his 8 years old son Kalle. Take a look at Kalle's driving videos in Youtube!!!! 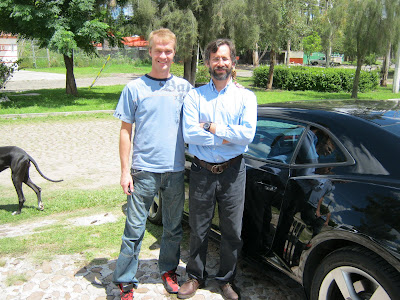 Posted by Gary Faules at 9:36 AM No comments:

Check Out These Awesome Photos

These never before seen photos were sent to me by my very good friend Reno who lives in Mexico and is an avid car guy like the rest of us and he has worked very hard at acquiring them. He bought the original photos from mr. Olivares (82 years old now) who was hired by the Mexican Newspaper Novedades to follow all the original 5 LCP races and take professional shots for them. Besides Reno and myself this is the very first time these photos have been seen by anyone. CLICK ON PHOTOS TO ENLARGE. Enjoy. 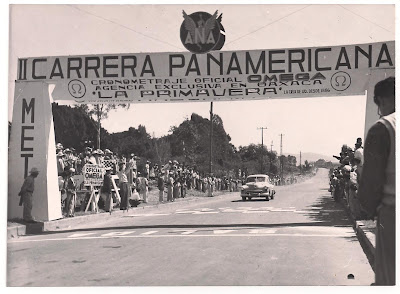 Check out the gala dinner festivities with the formal dinner and the race cars. 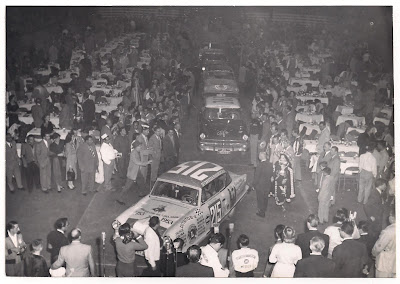 A.K. Miller getting some srvice on his car 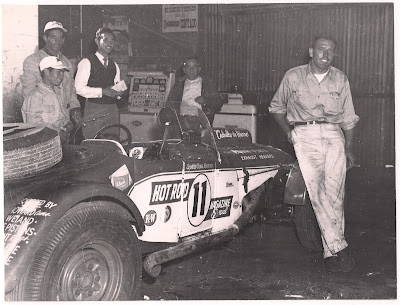 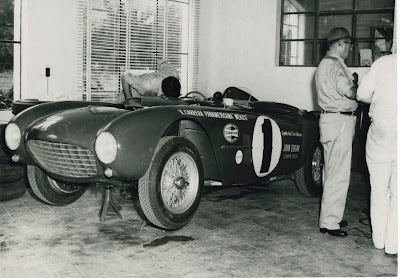 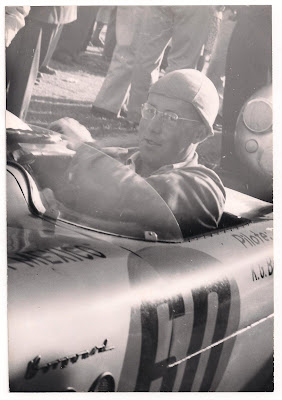 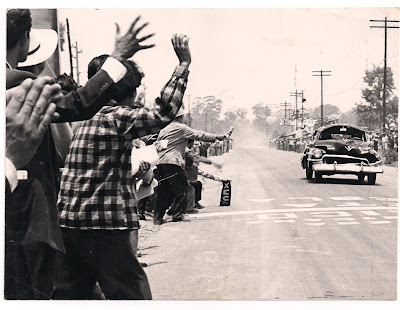 Writing on the back says "The fatal crash of Che Estrada Menocal from Guadalajara." There are 2 cars there and the bottom one is an early 50's Packard. Notice the smoke still coming up from the Packard, so the photographer jumped down to the place just after the fatality occurred. 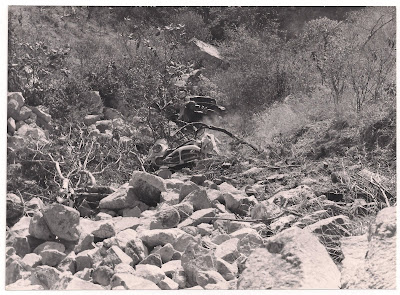 Reno wrote; Gary, this pic is quite interesting and impressive at the same time. This was taken just few hours from Felice Bonetto's fatal crash in Silao before starting that lap. An old gentleman driver from DF which was a young kid at that time was exactly were this photo was taken so he was besides Mr Olivares when he was taking this shot. This man is now 71 years old and when I showed him this after he was astonished to see it and he told me the full story. What a great coincidence. 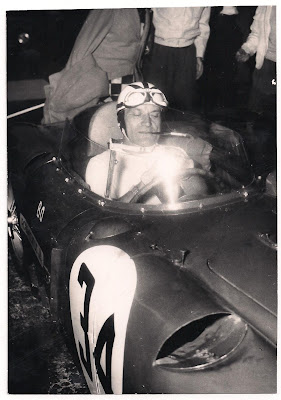 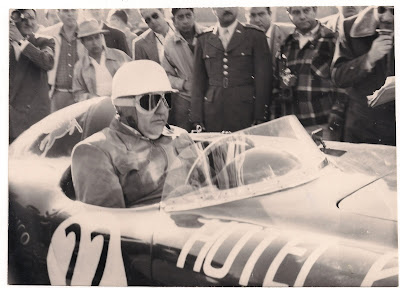 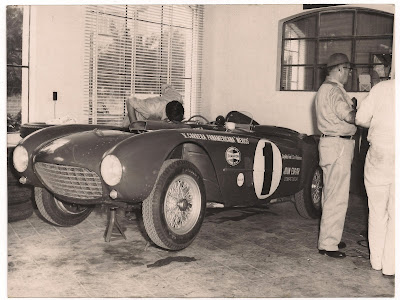 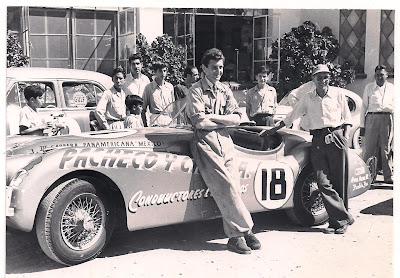 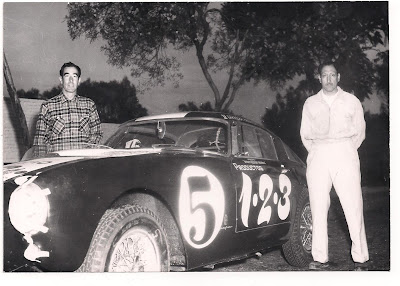 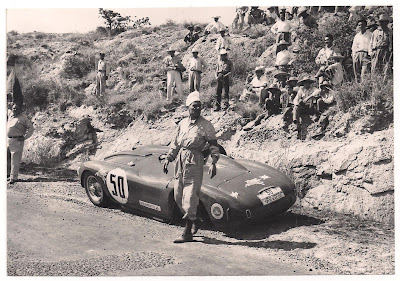 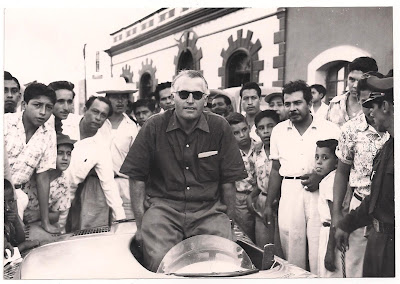 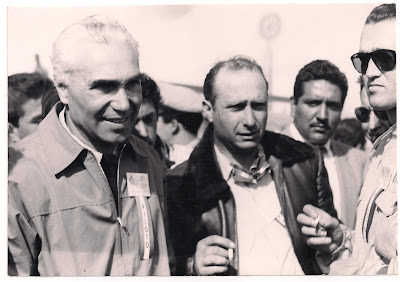 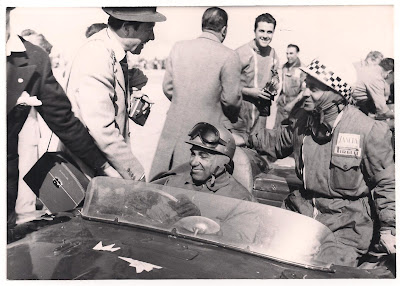 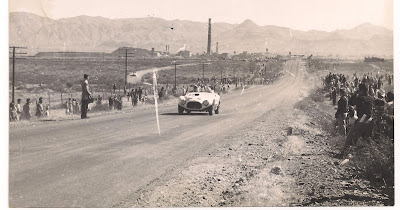 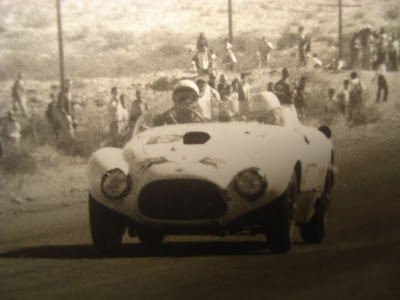 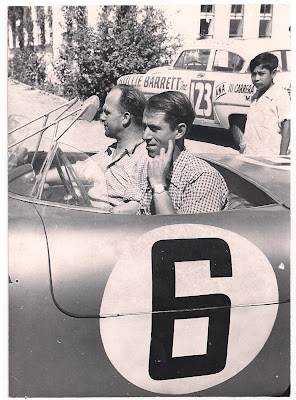 Leaving dealership after service. I thought that was a young boy on the left sporting the pair of Converse tennis shoes until I saw his mustache. 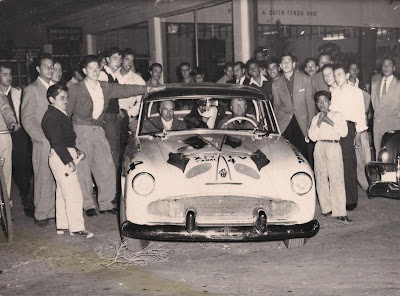 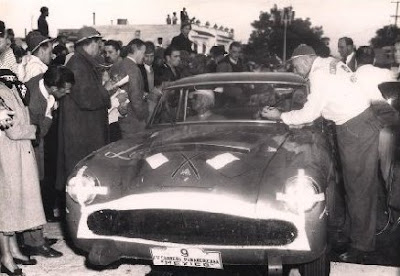 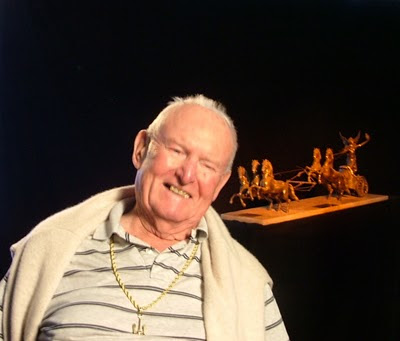 Several years ago my good friend Carson Scheller introduced me to one of the most amazing automotive guys I have ever had the privilege of getting to know. Way back then I made a post on my blog that started out... "Over the weekend I was very fortunate to get to spend a lot of time with a simply incredible car guy. His name is Frank Ruppert." Not only was I fortunate to meet Frank but in fact we became very good friends and talked on a regular bases. It is with heavy heart and tears in my eyes that I am saddened to report that Frank Ruppert passed away on Tuesday night, September 14, 2010. Like his son Chris Ruppert said, "He also loved life! Wow..90 years young! He was a unique and charismatic man who will be greatly missed by all."


I wished I felt more like writing about him as there is so much to tell and stories he shared with me that would leave even the biggest automotive story teller in dismay. Right up to the end Frank had a mind like a steel trap and better yet could back up ever detail with facts, photos and so on. Not only that but Frank helped give some of the biggest names in racing their start not to mention he hung out with many of the biggest names in racing. That said, I will be miss him terribly.

CLICK HERE for an article I posted way back when.

Safety, It Don't Matter Who You Are, It's Dangerous In Mexico

Just yesterday the mayor of San Luis Potosi, a small town in Mexico's Naranjo state that borders violent Tamaulipas state, was shot to death while sitting at his desk in City Hall. The victim, Alexander Lopez Garcia, was the third Mexican mayor to be murdered in the last month.

Authorities also announced Wednesday that they had found the bodies of a Tamaulipas prosecutor and police chief who had been investigating the massacre of 72 migrants last month.

Secretary of State Hillary Rodham Clinton indicated that she felt Mexico is becoming the new Colombia. She said Wednesday that Mexico's drug cartels are blossoming into an insurgency, a shift in American position that indicates the drug wars may be getting worse.