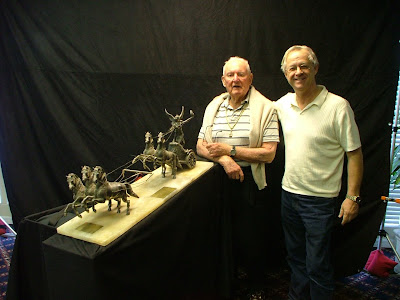 Anyone who has an appitite for anything of historical signifgicance with respect to La Carrera Panamericana should absolutely become a member and subscribe to the Road Race Lincoln Register. While it does cater primaraly to Lincolns, there is a wealth of information and amazing photographs and feature articles about the race it's self. In this month's edition of VIVA CARRERA there is the first installment of an interview with my very dear friend, the late Frank Ruppert who is without a doubt one of La Carrera Panamerican's most significant caracters and contributers.

Founded in 1972, the Road Race Lincoln Register was created to recognize the very special breed of Lincolns manufactured in 1952, 1953, 1954 and 1955, now known and revered as the "Road Race Lincolns," a rare breed of luxury car that became legendary for its prowess and durability in the "Mexican Road Race" in the early 1950's.

The club is international, with members in seven countries outside the United States. The club was expanded to include the 1949-1951 Lincolns, and then later assimilated 1956 and 1957 Lincolns into its ranks. It currently has approximately 250 members in the U.S. and seven other countries, and is an excellent source of information, parts and technical assistance for these cars.

The club publishes its magazine VIVA CARRERA! on a quarterly basis, with full color printing on the outside and inside covers. Dues are $36/year, U.S. and outside U.S.

The club may be contacted through its Editor:
Bill Culver - 640 Homestead Avenue - Metairie, Louisiana 70005, or bigeasy3@msn.com
Posted by Gary Faules at 6:08 AM No comments:

I have been enjoying correspondence with Stephen Mitchell and here is a preview of his documentary about the famous Mexican road races in collaboration with Ron Kellogg (whose extensive archive of original footage was the catalyst for the documentary) and Jeanetta Dumouchel.

From The Desk Of Gerie Bledsoe

**STARTING CITY: HUATULCO?
The official route of the Pan Am, October 21-27, 2011 has not been officially announced, but for only the second time the starting city is expected to be Huatulco, a resort area on the Pacific in the state of Oaxaca. Normally, the event starts in Tuxtla Gutierrez, in the state of Chiapas.

Huatulco is six or more long hours southeast of the city of Oaxaca by car and is served by a small airport. There is really no city of Huatulco. It is a series of small towns, nine bays, thirty-six beaches, and numerous lagoons featuring low-rise hotels. The coastline is rocky like Northern California’s, but the vegetation is tropical, like Hawaii’s.

Be prepared! Because there is no big city in this area, it is impossible to find racing supplies. It is also difficult to find a qualified shop to weld up your roll cage or make other repairs. Just make sure that you have what you need and your car is ready before you arrive.

If the starting city is Huatulco, we may assume that the race will spend the first night in the city of Oaxaca. Huatulco is well off the original Pan Am highway, but it is possible that the cars will again run south down the coast to Tehuantepec before racing north toward Oaxaca on the old Pan Am highway.

Expect it to be hot, muggy, and buggy in Huatulco, with the threat of tropical storms. The ending city this year is expected to be Zacatecas again.

**STATUS OF ENTRIES
For the third straight year the Pan Am will probably be over-subscribed. Of forty-four proposed entries from the U.S. and Canada, only 36 were admitted, and some of those have not received final confirmation. In past years, there have been as many as 54 entries from “North America.”

The big increase in entries recently has actually been from Mexico. Eduardo “Lalo” Leon, the president of the LCP Organizing Committee, said that he expected at least 57 entries at least from his home country, which is more than double what it was six years ago, for example.

At this time about 60 entries have been posted on the official web site www.lacarrerapanamericana.com.mx.

**CARRERA EXPENSES
The only mandatory fees are:

1. Entry Fee. The entry fee for 2011 will be $750 more than last year’s. The fee covers the driver, co-driver, and the car. For the first time, there will also be a substantial, additional fee to register more drivers or co-drivers.

2. Rally license. All drivers and navigators must purchase a Mexican rally license. Expect it to cost around $280-300 USD (paid at the start of the event). The license includes a modest amount of medical insurance.

Contrary to what the rules clearly stipulate, it seems that one does not need to have a racing license from their home country to acquire the Mexican license. However, racing experience, training, and/or practice are highly recommended. Drivers and co-drivers will also be given a quick, but free, medical exam before the race.

3. Mexican Car Insurance. Competitors must provide proof of insurance on their service vehicles at registration. The cost usually runs between $12-25 a day. There are several vendors, including my favorite Baja Bound in San Diego, that broker these policies.

Go to www.bajabound.com/?r=panamrace and shop for a company and an appropriate level of coverage. They are also one of the few companies that will issue policies on older cars. You can pay by credit card and download your policy via email. They are also helpful on the telephone. They understand racing in Mexico—from the Baja 500 to the Chihuahua Express.

During competition the race car and its crew are covered by the event’s insurance third-party liability policy. However, this policy may not cover a driver found guilty of gross negligence or driving under the influence. This policy also may not cover any damage inflicted by the race car on bridges, trees, buildings, guardrails, burros, cattle, or other impediments to racing.

The Pan Am entry fee covers admission to the race and one double hotel room (two beds) for two people for eight nights, October 20-27. If additional rooms are needed, they cost $160 per night, please send an email with your hotel needs to: info@lacarrerapanamericana.com.mx. The luxury hotel rooms have been filled, so there’s no need to ask about that option.

FOOD AND BEVERAGE
The expense for food and beverage during the Pan Am varies enormously with individual budgets, tastes, and selections of restaurants. One may eat very cheaply in Mexico or pay hotel prices, which are still less expensive than Europe or U.S. Most racers budget about $60 dollars a day for food, but some hotels will charge $25 just for the buffet breakfast. The fall in the value of the peso will help in this category. It is currently around 11.7 peso for one U.S. dollar.

FUEL EXPENSE AND TOLLS
PEMEX gasoline costs $2.80-3.00 USD a gallon. Plan to pay in pesos, but more stations are accepting credit cards. The race covers normally around 2000 miles counting wrong turns and side trips. Diesel fuel (black handle) is generally available, but it is the old-fashioned high-sulfur kind. Much of the gasoline sold in Mexico, especially premium, is refined in the U.S. and tends to be OK. Octane levels are 87 (Maga-green handle) or 91 (Premium-red handle). Racing fuel is not allowed, but you may use octane booster.

The race uses a lot of toll roads, and they are relatively expensive. Budget $200 for the racecar and $400 for the tow truck and trailer for the trip down and back to Laredo. (Pesos only.)

IMPORTING VEHICLES INTO MEXICO
Importing a vehicle on a temporary tourist permit costs around $35 USD (at the border or certain Mexican consulates) or around $56 USD on the Internet (credit card only). Importing a car with the services of a Mexican customs broker will cost $300-1200. This fee is highly negotiable.

A special brokering arrangement in Nuevo Laredo for the Coyote Convoy will be offered, if there is sufficient interest. A customs broker is recommended if (1) all the owners of the vehicles are not present at the border, (2) the truck and race car are in one person’s name, (3) the race car has no title, and/or (4) the team is carrying a lot of pare parts, extra tires, engines, welders, etc. If you are willing to pay the extra money, it is the stress-free way to enter Mexico.

More information on the importing of vehicles for the Pan Am will be sent to registered competitors.

TRANSPORTING RACE CARS TO MEXICO
Seven’s Only, a race shop in Buttonwillow, California, will transport your race car to Mexico and back to the truck’s headquarters in California for around $5,000 plus document fees, and will provide mechanical support on an hourly basis.

Unfortunately, there is no big truck coming from the Midwest or East Coast.

MECHANICAL SUPPORT
Competitors may arrange mechanical support in Mexico for $1500-3000, or they can pay local mechanics by the hour. Some of the U.S. transporters will provide mechanical support for an additional fee. Towing within Mexican can also be arranged. One team of Mexican mechanics and welders usually follow the race. They will repair cars on a retainer basis or by the hour.

**THE COYOTE CONVOY: ITS TENTH YEAR
Towing or driving a race car to Mexico? Join the Coyote Convoy. The convoy of twenty or more trucks, trailers, and race cars will leave Laredo, Texas on October 14, 2011 for the trip across the border and down to the start of the race. The convoy will stop for two nights in the Mexican resort city of San Miguel de Allende, before heading on to the start of the race. It will arrive in the starting city on October 17. Registration and inspection starts on October 18.

**RULE CHANGES
The official rules or “Reglamento” for the Pan Am are being revised for 2011. Some changes were made in an effort to slow the fastest cars down somewhat. These changes should be announced soon.

Please note that a HANS devices or other approved (FIA/SFI) head and neck protection system will be required in all classes this year.

FIA approved racing seats may also be required, along with things like: spec carburetors, spec differential gear ratios, and a limit on maximum RPM.

Owners of cars being built now for the Pan Am should have the design for their roll cages reviewed before the cage is installed. All roll cages and safety equipment are subject to inspection and final approval at the start of the event.

**FUTURE EVENTS
Chihuahua Express, April 8-10 (There is still time to sign up!)

Photos and additional information are available at www.panamrace.com. Click on Classifieds.

**LEGAL
The views expressed herein are those of the author and may not (probably not) represent the views of the Organizing Committee. The author is a competitor and any advice he offers may constitute a conflict of interest.

All forms of motor sports are inherently dangerous, and La Carrera Panamericana is no exception. It is a long, hard endurance race at high speeds along mountain roads. Mechanical failures are common, accidents not uncommon, and injury, even death, are possible. Cars should be carefully prepared, with an emphasis on safety (brakes, roll cage, etc.), and driven prudently. Drivers and navigators should remember that the most important goal is simply to finish this race.

Enjoy these lengthy Spanish-language films of each of the 1950-1954 Carreras Panamericana that show many famous racers – Mickey Thompson, Phil Hill, Bill Vukovich and more. WARNING: You're going to need a long afternoon to enjoy all these.