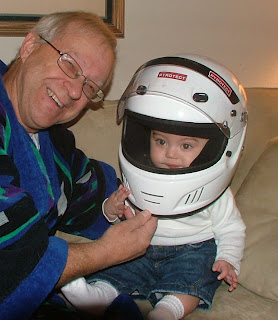 Hello everyone and here's wishing all of you a HAPPY NEW YEAR. And don't forget, this is the year we run the La Carrera Panamericana. How do you like my new helmet? Well, the truth is, this is my Grandpa's new helmet that my Uncle Will got him for Christmas. But hey... It looks like a pretty good fit on me wouldn't you say?

Isn't it funny that usually it's the father that gets a helmet for the kids and says, "Now be careful." but in this family it's the kids that say, "Here's your helmet dad, now go like hell!"
Posted by Gary Faules at 7:56 PM No comments: 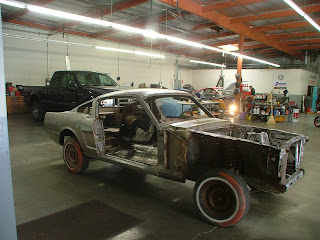 Today was huge considering Lucky is finally at IMPACT ENGINEERING for the roll cage install. Now things will start to begin to take shape into a REAL race car. As it was rolled into the shop it was parked between some good company, right between two of the Car and Driver team race cars being prepared to run in next years Grand-Am Cup series.
Posted by Gary Faules at 6:47 PM No comments: 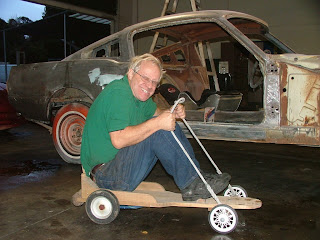 One thing I have learned about these long term race car builds is that you must find time to relax and enjoy yourself. So today I decided to bring along a "back-up" car in the event something should happen to the GT350. Notice we have spared no expense.
Posted by Gary Faules at 6:58 PM No comments:

Wild Imagination a Must 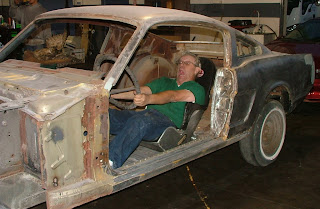 Today I had time to take a seat in the car to "reflect" for a few minutes as to how I would hope the car would feel and act. Keep in mind I have an over-active imagination. (Click on photo to enlarge)
Posted by Gary Faules at 6:37 PM No comments:

Hurry up and wait 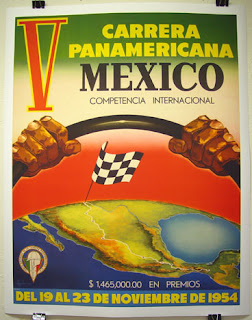 If what they say about "Good things take time" then this car is going to be awesome. The body shop took a little longer than planed but with some prodding finally the car is back in my hands. This week it will be hauled to Anthony Vanni's shop for the beginning of the full roll-cage installation. In the spirit of Christmas and little boys I am able to recall exactly how it felt when I used to have a hard time waiting for "THAT DAY" to hurry up and get here and waiting for each phase of completion on this project is no different. If all goes to plan, by this time next year Jon, Will and I will be excitedly recalling what an awesome adventure we all took part in down in Mexico. The only difference between us and the Christmas's we have experienced in the past is the fact that the toys are bigger now than they used to be and we don't have to make pretend motor sounds to get excited.

Merry Christmas to one and all and Happy New Year.
Posted by Gary Faules at 8:19 AM No comments:

Priorities and having them straight

Being a successful race car driver begins with family because without family to back and support you you have nothing. Sure racing is in our blood and it's our love of racing that keeps us young, healthy and always striving to obtain new goals. It is this striving to obtain new goals that transcends over into our daily lives whether it be work or our family lives. In the same breath we learn how much we value live and our families as well. In my opinion race car drivers for obvious reasons tend to appreciate each moment more so than others who tend to take precious moments for granted. Does this mean we are any better off than others? Of course not, we just tend to push ourselves past what some consider "comfortable" or "acceptable" zones.

I have been blessed to have such a family that has always accepted my love of cars and racing. That same acceptance has been carried over to include everyone in my family not to mention my employees as well. I have found over the years that this love and respect of racing and all things automotive helps even my employees feel more like family than just someone who punches a time-clock. Employees who become involved in team events seem to have a much higher self esteem and pride than those who do not and it shows around the workplace and at the track. Having my family involved with racing over the years had brought us closer together and it has been something that we can share on the same level. Both of my children have equally found it rewarding to learn how to become self reliant with their ability to learn their own limits and find ways to dominate fellow competitors. Both have sought not only to set higher goals for themselves but have also learned when their goals are not realistic. All in all, the rewards of having a supportive family who shares equally in the ups and downs of racing has been far more rewarding than any trophy or position on any podium.

This brings me to another category of those involved with my racing... my friends. Like any other venture or hobby, we all have friends... Those we can count on and those we can not. And then there are those whom we respect and those whom don't deserve it. This brings me to one of my friends whom has been on my mind all week. Some racers are so addicted to racing that they tend to find excuses for the need to be at the track. Quite often some such excuses help a driver make a fool out of himself. Over the last year one of my best friends and fellow teammates expressed his desire to race in the 25 Hours of Thunderhill and he did everything in his power to reach that opportunity. There were many reasons behind his desire to run this race but understand it was paramount and his emotions were high. A few weeks ago he was taken on by a team to be co-driver in that very race and all the arrangements were made. Needless to say, he was stoked and I was just as excited as him since he is an awesome racer and fierce competitor and more than deserving of such an opportunity.

There are men and there are men but some men think with their brains or what little they have while other's think with their heart knowing full well right from wrong. This individual proved he was the later. On Friday morning when my friend was leaving for the track with duffle bag in hand he stopped to kiss his wife and baby goodbye for what they knew would be a long weekend but then the phone rang. Little did he know when that phone rang just how long that weekend was going to be. The phone call was not a welcome one at all as it carried some bad news regarding my friend's mother in law. Now in my opinion this is where he showed his true colors. I have known men who at this very instance would have began asking themselves, "How will we handle this? Who should I call? After all I will only be gone a couple days and besides all the arrangements have been made. I have to go." But none of these thoughts even entered his mind and he knew there was no decision to be made whatsoever. He was staying at home and there wasn't even anything to consider. Within a few moments he had called my son to take his place in the 25 Hours Of Thunderhill and simply said, "Make me proud."

I couldn't be more proud to call this individual my friend and judging by the example he sets and the standards he adheres to both as a family man, an individual and a friend I can honestly say I made the perfect selection. This man in Jon Emerson, my friend and navigator and co-driver in next years La Carrera Panamericana. I tip my hat to you Jon and my family and I send our prayers and thought to both your wife and mother in law and you.
Posted by Gary Faules at 3:48 PM No comments:

Getting a head start 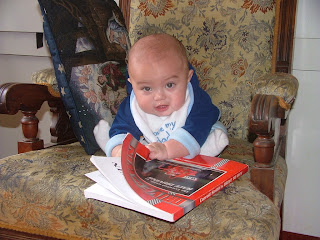 Well Folks, I decided why wait so I picked up one of Gramp's books called Drive To Win by Carroll Smith. In no time at all I should be up to speed.
Posted by Gary Faules at 2:32 PM No comments: 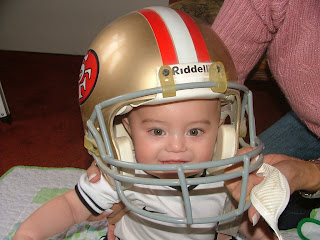 My name is Tyler Gene and I am my grandpa's favorite grandson and all the chicks dig me. Oh sure, I'm his only grandson so far but I'll always be the first, that's because I'm just like him... FAST. If Grandpa would let me drive I am sure I could make his new car go real fast and besides, who ever heard of a fast grandpa? I weigh a lot less than he does and everyone knows the lighter the car the faster it will go. Check out my racing helmet I found in Gramp's den. Joe Montana gave it to him but I'm sure if I take good care of it he won't mind.

Speaking of first, I just had my first birth (with a little help from my mommy) and then my first Thanksgiving and soon my first Christmas. I also went on my first trip to Oregon to see my Great Granny and boy was she great! She thought I was all that and she was pretty hip too for that matter. I love both my great grandma and my Grandma too so I plan on giving them lots to talk about. Maybe I'll have my first tooth soon. Just wait until my mommy sees what I can do with that! Gramps sure is gonna laugh.

Grandpa wants to paint the new car white with blue racing strips but if I had my way I would paint it the color of my favorite toy car... bright red with white racing stripes. One of these days my daddy is going to build me a fast mustang too and then I can teach both of them how to drive. I better say goodnight for now and I better start reading that driver's handbook.... Oh crap, I just remembered... I can't read yet! I can't even say La Carrera Pana... Pana... Panemer.... aye carumba!
Posted by Gary Faules at 7:33 PM No comments:

Phase one is almost complete

The floor pans have been installed and most of the rear frame-rail installation is completed as well as some minor rear quarter panel repair. As soon as it is completed the car will be put on a trailer and delivered to Anthony Vanni's shop for the roll-cage installation which will include a six point cage and Nascar bars on both drivers and passenger's doors for more protection of both driver and navigator. There will also be roll bar protection out thru the firewall and into the trunk which will protect the fuel-cell. Anthony Vanni is without a doubt the best roll-cage builder on the west coast and the only one I would even consider after watching videos of recent crashes from this year's La Carrera Panamericana. Anthony called last night to let me know he is ready and waiting for Lucky.
Posted by Gary Faules at 1:03 PM No comments: