During the Father's Day weekend I was with my good friend Hershel McGriff and he was telling me unlike many of the factory sponsored teams he had to "drive" his race car all the way to Mexico and back from Oregon. It was that conversation which reminded me how lucky many of the teams in attendance were in comparison to guys like Hershel who had to haul "what they brung" in the race car. Considering this all took place back in the early 50's I can't imagine how impressed the citizens of Mexico must have been.

Recently there has been several articles written in several blogs and magazines about the transporter which was used by the Lancia Team during the 1953La Carrera Panamericana one of which was in Hemmings Auto Blog. Since I hadn't mention any of this to anyone you can imagine how surprised I was when my friend Paul Chenard from Automobiliart.com sent me an email informing me about a notice he had just received from ABC Brianza in Italy of a gorgeous 1/43 La Carrera Panamericana 1953 Lancia Team transporter they're marketing.

You may recall Paul Chenard's awesome rendition of Juan Fangio and his Lancia that I personaly showed to Eduardo León Camargo (President emeritus of La Carrera Panamericana) which coincidentaly was hauled in this transporter. 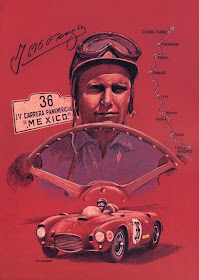 Now here's something every La Carrera Panamericana worth their salt needs on display especially those knowing anything about LCP history. 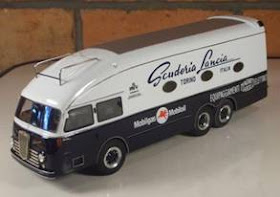 This blue/white race car transporter used by the Scuderia Lancia Team was built and used from 1953 until 1955. The unique carrier was built on a Esatau 3-axle bus-chassis. The body was built by Garavini of Turin/Italy. It had a combination of 8 wheels, two up front steering, a set of duals in the rear for driving and a second set of singles in the rear for load, much like the contemporary Greyhound buses. The transporter could carry 4 race cars and 6 mecanics. 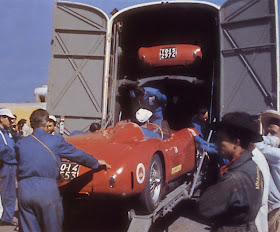 Like so many other manufactures, in 1955 Team Scuderia Lancia stoped racing due to loss of lives in two major racing incidents... one being the infamous Lemans race and the large number of deaths in La Carrera Panamericana. The transporter was later sold and used as a horse-transporter. I suppose some old farmer assumed if it was good enough to haul Lancia's horsepower around it was good enough for his.

Here we can see the Lancias being loaded up in Tuxtla Gutierrez in November 1953 at the end of La Carrera Panamericana before heading back to Mexico City for the awards ceremony. 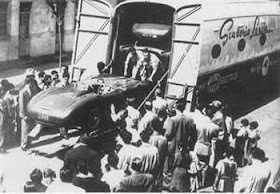 Both Lincoln and Lancia came to the race highly organized and both factories swept 1-2-3 finishes in their respective categories. The Europeans dominated the sports categories, and the Americans the stock. Large Sports Cars was won by Juan Manuel Fangio of Argentina in a Lancia.

CLICK HERE for the complete story of this amazing masterpiece which describes the terrible crash of one of Team Lancia's cars. 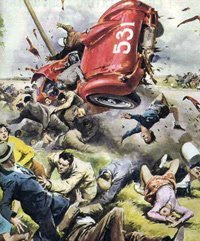