La Carrera Panamericana... Not To Be Taken For Granted 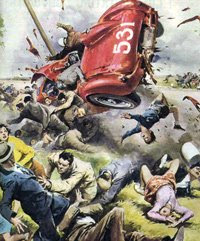 While La Carrera Panamericana can be the adventure of a lifetime it can also be your last should you decide to not give it the respect it demands. There is a reason the Mexican's have so much passion for this event and not at all unlike a bullfight, it can end in victory or it can end in death. Hemingway wrote, "Bullfighting is the only art in which the artist is in danger of death and in which the degree of brilliance in the performance is left to the fighter’s honor." I believe had Hemingway known more about auto racing he would have felt the same about it as he did bull fighting.


The 1953 edition was the fourth start in the Carrera Panamericana for Felice Bonetto, one of the greatest Italian road racers: he was at the wheel of a powerful Lancia D24 sportscar. The Scuderia Lancia had entered an incredible team with five drivers, Bonetto, Juan Manuel Fangio and Piero Taruffi (winner of the 1951 edition of the race) in three 3.3-litre cars, and Giovanni Bracco and Eugenio Castellotti with two 3-litre models, with crew of about 30 mechanics and engineer, with one service truck and with Gianni Lancia in person as team-manager, following the 6000 kms race in a private airplane. Their best competitors were Umberto Maglioli-Pasquale Cassani, Mario Ricci-Forese Salviati and Luigi Chinetti-Fon de Portago in three 4,5-litre Ferrari 375MM, and other private Ferrari’s driven by Angelo Stagnoli-Giuseppe Scotuzzi, Guido Mancini-Fabrizio Serena and a couple of young American drivers: Phil Hill and Richie Ginther. Louis Rosier raced his Talbot Lago.

During private tests, before the start of the race, Bonetto with Taruffi and other Italian drivers, painted a blue or red sign to point out dangerous bends, bump in the road or trees beside the road. Also in the stretch between the towns of Toluca and León, where several vados, a sort of large gutters, crossed the road, Bonetto painted a lot of blue alarm signals on the asphalt: this will be ineffective to avoid him the fatal crash, some hours later.

On Thursday 19 November 1953 morning the IV Carrera Panamericana started: Bonetto was the winner of the 530 kms. first stage Tuxtla Gutiérrez - Oaxaca, with 2’40” from Taruffi and Fangio. In the early hours of the race Angelo Stagnoli and his co-driver Giuseppe Scotuzzi lost their lives in a huge accident happened in the long straight near the small town of Tehuantepec, when for a tyre failure their car went off the road, overturned and exploded. In another accident happened near the Tehuantepec River bridge, six spectators were killed when the Ford 6 of Mickey Thompson-Rodger Flores went off the road.

On the second day of race, Piero Taruffi won the stages Oaxaca – Puebla and Puebla – Mexico, but Bonetto still led the race retaining 41” advantage. Fangio had sustained an accident and his car’s axle was broken: Lancia mechanics were able to repair the car in the paddock before the start of the following stage, but Fangio seemed out of the race with a gap of seven minutes from Bonetto.

After the start of the 420 kms stage Mexico – León, the course went uphill in a mountain road until 3100 meters below sea level, and after 100 kms redescended to pass the town of Toluca, and to go ahead via a long straight in which the cars used full throttle, towards Queretaro and Irapuato, Felice Bonetto leading. Gianni Lancia was afraid about the last faster stages of the Carrera Panamericana, where the strenght of Maglioli’s Ferrari could make up for lost time to Lancia’s, so he asked his drivers to maintain the positions. But el Zorro plateado Taruffi, beloved by Mexican crowd, probably wanted to win again the race, and closely followed his team mate and rival Bonetto. They arrived together at full speed in the foggy area before the small town of Silao: a large left bend was at the end of a long straight, with several spectators beside the road. While approaching the fast bend, Taruffi tried to get near Bonetto but was unable to negotiate the bend and went off the road in a cloud of dust. The car wasn’t damaged and he returned in a few minutes on track with the help of the spectators, and took up his run. In the meantime Bonetto didn’t slow down: perhaps he did not realize his competitor was out and he kept on pushing, also arriving in the stretch in the center of Silao, where he had put his painted blue danger signal. He passed at about 200 km/h (instead of wise 100, 120 km/h) over an one-meter large vado, his Lancia suddenly swerved and crashed against the balcony of a house on the right, ending its veering against a pole. Felice Bonetto fatally hit his head into the balcony and was immediately killed.

According to the accident reports of Italian journalist Giovanni Canestrini, on the contrary Bonetto had perceived his competitor’s crash and instinctively relaxed his concentration: so he didn’t look at his danger signal painted on the asphalt and passed over the bump across the road too fast.

It is also to be reported that Piero Taruffi claimed in some interviews that Bonetto received first aid a long time after his accident. Probably Taruffi asserted that because he felt somehow guilty for the death of his companion, however a few recent sources confirmed this information. According to these accounts nobody rushed to help Bonetto after his crash because, following the disaster of two days earlier, when six spectator were rolled over and killed by a car while they were standing on the road trying to rescue another accidented car, the Mexican Government imposed the National Army to shoot every man or animal (!) crossing the road during the race (see also the circumstances of this other fatality of the year before for a related case, so nobody had the nerve to approach the wrecked car for over a hour fearing to be shot down by the soldiers. Anyhow, since it's believed that Felice Bonetto had died instantly, this delay was probably not a factor in the death of the driver.

After the death of Felice Bonetto, Gianni Lancia wanted to withdraw, but Fangio, Bracco, Taruffi and Castellotti decided to keep on racing, in honour of their unfortunate team mate. After Maglioli, their best opponent who had won the fourth stage Mexico – León, lost a wheel and finished his race, Lancia forced the drivers to maintain the positions and to drive with riding-mechanics on board. Taruffi won the fifth stage León - Durango, while Maglioli who had replaced Mario Ricci at the wheel of the third Ferrari 375MM of the Scuderia Guastalla, dominating the last three stages Durango - Parral, Parral-Chiuahua and Chiuahua-Ciudad Juarez.

Juan Manuel Fangio with Gino Bronzoni was the winner of the race at Ciudad Juárez, whitout any stage victory, being Piero Taruffi-Luigi Maggio second and Eugenio Castellotti-Carlo Luoni third. Giovanni Bracco did not finish the race, Maglioli-Ricci-Salviati were classified 6th.


Felice Bonetto was an expert 50-year-old driver, he had started his racing career in the 30s (2nd overall in the 1933 Circuito delle Province Meridionali - Coppa Principessa di Piemonte, and 12th overall in the 1934 Mille Miglia race, driving a AlfaRomeo 8C 2600), but he obtained his greatest success after the Second World War, when he was a grown-up person: he won the 1947 Circuito di Firenze driving a Delage 3000, he was 2nd in the 1949 Napoli Grand Prix in a Ferrari, and in 1950 he won the Pontedecimo-Giovi hillclimb in a Osca and the Circuito do Porto in Portugal in a Alfa Romeo. In the Mille Miglia race he scored a 2nd place overall in 1949, at the wheel of a Ferrari 166MM Touring, behind Clemente Biondetti, a 6th place in 1951 in a Alfa Romeo 412 spider, and a 3rd place in 1953 in a Lancia D20.

In 1951 he drove for Alfa Romeo the new 1900TI model and was the winner of the touring-cars class (15th overall) in the Giro di Sicilia. Then in 1952 he passed to Scuderia Lancia, and at the wheel of the legendary Aurelia B20, on March he scored a 2nd place in the Giro di Sicilia, not so far from the winner Paolo Marzotto, in a 2-litre Ferrari sportscar, on May he was 6th overall, first of the GT-cars class, in the Preis von Bremgarten, on June he obtained an 8th place in the 24 Hours of Le Mans with Enrico Anselmi as co-driver, and finally a great win in the Targa Florio, from team mates Gino Valenzano, second and Enrico Anselmi, third. The following season started with a DNF in the 1953 Giro di Sicilia, in a 2,5-litre Lancia Aurelia B22, and the 3rd place in the Mille Miglia with the D20 sportscar. After he did not finish the Le Mans 24 Hours with co-driver Gino Valenzano, he was 2nd in the Gran Premio di Monza behind Gigi Villoresi in a Ferrari, 9th in the Coppa d’Oro delle Dolomiti, and 1st in the Grande Premio do Jubileu at Monsanto Circuit, Lisbon, from Stirling Moss in a Jaguar C-type.

Bonetto also raced single-seaters, scoring 16 Formula 1 starts, from 1950 to 1953 (first start 1950 Swiss G.P. at Bremgarten, 5th overall in the Maserati of the Scuderia Milano), obtaining two 3rd places in the 1951 Italian G.P. sharing the Alfa Romeo 159A with Nino Farina, and in the 1953 Dutch G.P. sharing a works Maserati with José Froilán González.

Some years later Roberto Bonetto became a well known motorsport journalist in Italy. During his honeymoon in the 70s he went to Mexico to visit the place of his father’s death. In the village of Silao he found two memorials for Felice Bonetto, a plaque on the wall of the house, where the fatal balcony had been demolished, and a monument with a bronze bust in Silao cemetery. There was a legend about this monument, inside which it seems Bonetto’s heart is preserved: the day after the accident, after Bonetto’s death, the Mexican doctor who made the postmortem examination decided that such a strong heart like Bonetto’s must remain in territory of Mexico!
Gary Faules at 3:06 PM